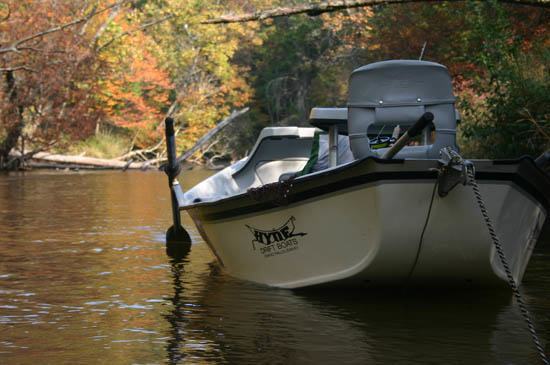 A very good rowing or oar manipulation skill is the crawl stroke. The crawl stroke is a combination of backrowing and sweeping. Sweeping is accomplished by turning the oar around facing upstream and pushing or pulling on the oar handle sideways rather that front to back as in standard backrowing. The reason learning the crawl stroke is so beneficial is that you can eliminate a high percentage of standard pivot turns, which make it much easier for the angler in the stern angler. The stern angler is the most affected by using pivot turns because the stern has to move laterally to execute the pivot.

The crawl stroke is a smooth oar stroke and minimizes the lateral movement for the stern angler, which enables the angler to keep fishing as normal while executing a turn.

As you backrow with one hand, lefts say the left oar in this example, you turn the right oat around and face the oar blade downstream or towards the bow to get it in a position to sweep. Sweeping pushes water sideways under the boat rather than parallel to the boat like a normal backrowing stroke. The left oar stroke needs to pivot the boat to a slight ferrying angle of about 15 degrees, to the right in this case. The pivot must be made before starting the crawl stroke with the right oar. The right oar, facing downstream, is dipped into the water a few feet to the side of the boat, and then the oar handle is pushed sideways, away from the boat. This will feel unnatural at first, sort of like patting you head and rubbing your tummy.

While doing the crawl stroke the oarsman leans sideways rhythmically with each oar stroke, twisting the body somewhat rather than leaning back. This is due to the pushing out on the crawling oar that is pushing water sideways under the boat. You pull on one oar (in this case the left oar) while pushing on the other oar ( the right oar in this case).

The crawl stroke is not a rowing style or method for heavy water maneuvering or when you encounter strong cross winds. It is ideal for subtle maneuvering around rocks or making turns at river bends to avoid as many pivot turns that give the stern angler casting and line control problems.

The crawl stroke is good for grabbing eddies around boulders when you want to pull in behind it. The downstream crawl oar is pointed to grab the back swirling eddy water which helps pull the boat in behind the rock.

Another good time to use the crawl stroke is on the inside bend of a river and when you are on smaller rivers and don’t want to get swept out into the outside bend or into a cut bank. This works when the flow into a bend or turn is moderate. When making a turn in heavy currents you need to use a pivot, and use your standard backrowing stroke.

When encountering a corner that is a gradual turn you can use the crawl stroke to ease your way around it. The crawl stroke helps draw the boat into the eddy water and turn the corner. Because a boat coming down the main current is going faster than the currents is going faster than the currents in the eddy the sweeping oar has a pronounced front ruddering effect. The boat tends to go in the direction the submerged front facing sweeping oar is pointed. Continued backstrokes are necessary when pulling off this move are needed to keep the boat from spinning in a circle. As mentioned earlier in powerful rivers revert to normal pivoting and backrowing. Otherwise the crawl stroke helps steer you into eddies and around corners.

Hugging a Bank With the Crawl Stroke

The crawl stroke allows you to hug a bank closer than you can using conventional rowing strokes, This is good for side channels when you don’t have time to stop and wade fish. You can still fish the middle and far bank with stealth. The sweep oar can push water either under the boat or away from the boat as you move along. The sweep oar often scrapes bottom as it is close to the bank. make sure you don’t stick the sweeping oar in the streambed or root wads along the bank.