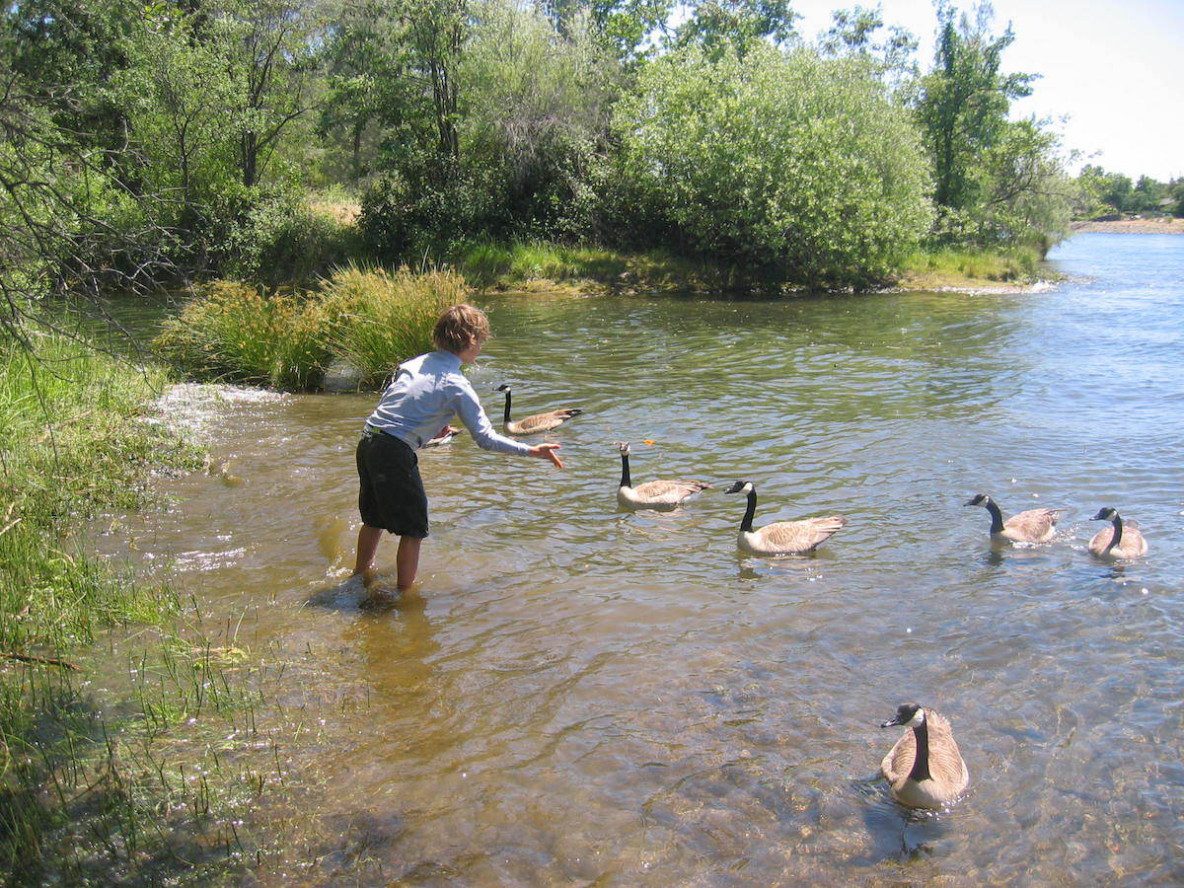 I was in Hawaii this year for the Christmas and New Year holidays and I spent a lot of time playing in the surf with my 11 year old son, Zack, and his three cousins, Isaac (9), Natalie (6), and Gabrial (3). They are all younger than Zack and he’s sort of the older brother to them. I usually spend time in Montana each summer with the 4 young amigos and I fish the Madison River with them in my raft. This holiday I spent a lot of time chasing the younger two kids in and out of the surf and watching Zack and Isaac boogie board. I was sitting on the beach watching them play and my mind wandered to the time when Zack was about 4 years old and we played on this very same beach. This is where he began to love playing in and around the water.

I also started thinking about Zack’s 1st exposure to fly fishing and how he loves to drift down the rivers we have fished on. When I first started taking him fishing with me he couldn’t have been more than 4 years old. This was about 7 years ago, so it must have been in the summer of 2002. It was mid summer and the caddis were pumping on the Lower Yuba River in the evenings. It was also the first year that I hooked up with Blake Larsen and took him down to see what the Lower Yuba was all about. Take him to school so to speak. Since that time Blake and I have been fishin’ buddies. He has spent many days with Zack and I in my drift boat or Fishcraft raft fishing the Lower Yuba River and the Lower Sacramento River here in Northern California.

That summer 7 years ago we would head down to the Lower Yuba after work at about 5:30 and try to arrive on the river once the sun was behind the western hillside and not be so hot and bright. We typically would hike upstream to a flat were the trout would start podding up and rising to the hatches once the direct sun was off the water. The hatch would typically start as a mayfly hatch with a few caddis and then transition to a much stronger caddis hatch.

We would set Zack up along the bank and willows where the water was calm and about six inches deep with the net and he would be our “net man”. I would rigg up with a Quigley’s Cripple for the mayflies and a special partridge soft hackle that I had tied up for the caddis. I would then wade up stream of where Zack was positioned. There was a seam where we would almost always spot a pod of rising fish and I’d pick a fish to target. If the fish would refuse the dry I’d re-cast and I’d stop the drift of the dry upstream of the targeted fish and let the soft hackle rise or swing in front of it. Believe me this was a successful technique. It seems to me now reflecting back that the caddis used to come off in greater numbers than they do now. Or is it just me? I know the trout don’t pod up like they used to though. We’ll discuss that another day.

We would set up Zack as our “Net Man”. Anyway, sooner or later I’d hook a fish and then I’d work the fish and wade downstream toward where Zack was positioned so he could net it. As I would move slowly downstream towards Zack, Blake would then wade back into the same area upstream and he would then try his luck. There were many evenings where this system worked like a charm and Blake and I would take turns working fish downstream to Zack. He would be waiting, grinning from ear to ear as we let him net the fish and then release them. We were rigged up with waders and he was wading in the shallows in his swimming trunks and life vest. If we would lose the fish he would give us a hard time. He would wade out to meet us in about a foot of water in the real slack water along the edge of the run to net the fish. He’d then tell us, “Go get another one”. Priceless. We did this dance hooking and releasing trout many evenings during that summer. It was our own version of “Dances with Trout”.

Further downstream there was a big reversing eddy hole that we all referred to as the “Honey Hole”. We would typically hike downstream and end up at this spot right before or at dusk. Every evening there was a strong hatch of pale evening duns coming off in this hole. We would cast, straight lining into the current tongue and let our flies swing down into the eddy. You had to hold on because most times the trout would hammer the fly on the swing. We would keep a loop of line on our rod hand in our finger tips and if a trout would take you’d just let it slip out of your fingertips and raise the rod tip slowly. A quick set would typically bust you off immediately. Blake and I would do the same thing with Zack. There was a little beach at the slowest portion of the eddy pool and we would set Zack up there with the net and a headlamp. Sometimes right at dusk we would be hooking fish and couldn’t tell what the heck we had until we got it in the net and checked it out with our head lights.

On one trip I had the bright idea to bring along a spinning rod and rigged it up with a bubble and the same flies we had been using so Zack could give it a try fishing in the “Honey Hole”. Unfortunately Zack was sort of like ” Heck, why am I using this thing went they’re catching fish with a fly rod?” The next thing I new there he was with a big tangled mess. I cast my rod out into the current seam and then said, “Here Zack, hold onto this and I’ll get you un-tangled. ” As I was attempting to get things straightened out Zack yelled “Dad!!” The reel was zinging and he was holding on for dear life. I dropped everything and got behind him and helped him get the rod tip up and get things under control and told him “Zack, start reeling.” I grabbed the rod above the cork grip and helped him keep the rod tip up or let it down when the fish started to run. We worked together and got the fish right up to us and as he raised the rod tip up I gently netted it. It was just at dusk and we both turned our headlights towards the net and low and behold there was a gorgeous 20″ bow sitting calmly in the net. I will always remember the look and smile on his face. He said “We caught it Dad”. It just doesn’t get much better than that. It is one of my best memories of fishing and I have been fishing for over 30years.

We would stumble back along the river to where we were parked by flashlight. Zack would lead the way. Sometimes we’d bring along some charcoal and some “PJ’s” dogs and have a moonlit riverside dinner, tell stories and reminisce before heading home. I firmly believe that it is times spent with your kids and having experiences like this that help you bond with them better than almost anything else that you could do. There’s something about being out in nature with your kids and appreciating the wildness around us that stays with you for the rest of your life. That’s what Fly Fishing is all about.

Take my advise and take your kids out fishing. You will never regret it. Make your own Traditions!