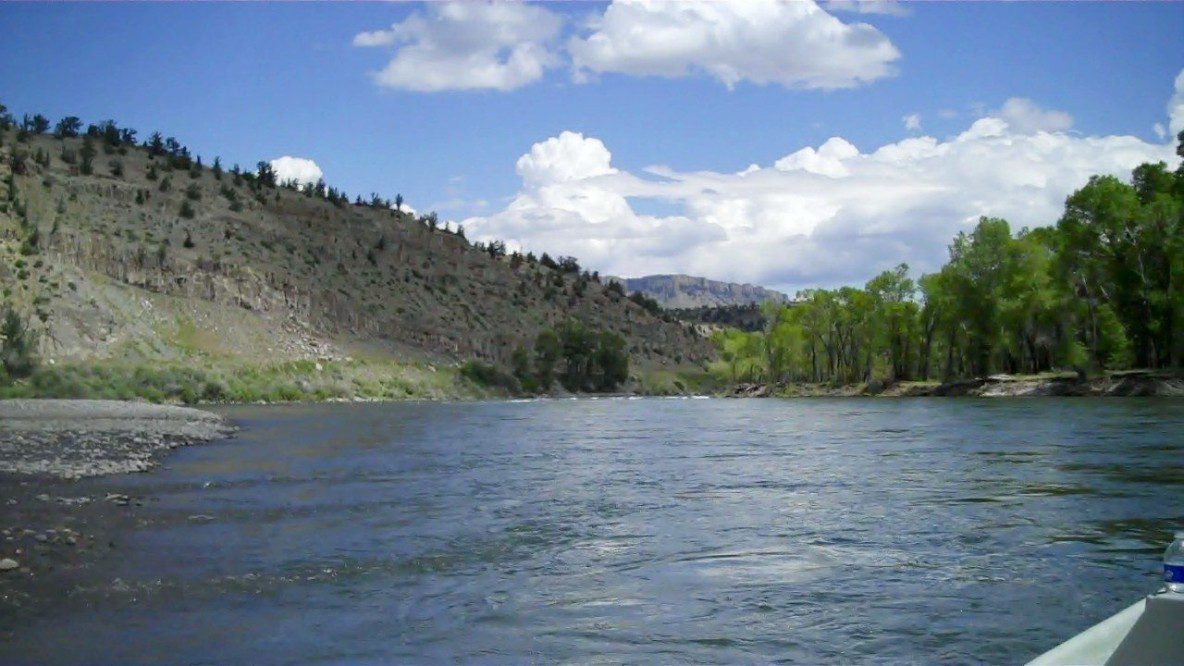 Whenever we make it out to Bozeman, Montana, I make a point to call Nathan Gaffey, a guide who works for The Rivers Edge. Zack and Nathan hit it off really well and a good time is had by all. This will be the third year in a row we’ve made it out with him.

The Yellowstone River is still running high at this time which is abnormal. The flows up around Emigrant are about 5500 cfs and lower on the river at Livingstone they are about 6300 cfs. Big! Clarity is about 3 to 4 feet. The river is just now getting into shape. Nathan recommended that we float from Livingstone down to “The Pig Farm” which is below where the Sheilds River comes in. This float is about 12 miles.We would avoid the crowds and mostly the whitefish that everyone was catching upstream around “The Bird Float”. Nathan boated over 30 whitefish and one trout the day before up around Emigrant. When floating the Yellowstone when it is this high you need to be careful and on top of your rowing game. The eddies are just huge and nasty. Some of them look like they could just suck your boat down to the bottom. We were up for it!

The rigging method for the day was with a Thing-a-ma-bobber about 4 feet above a single lead shot, a pretty small one, Nathan tied on a new rubberlegs pattern which is similar to the one’s we’ve all been using except marabou has been substituted for the rubberlegs at the tail. He stated that the green ones have been working. We used assorted beadhead nymphs tied approximately 2 feet off the hook bend as a trailer. During the day we tried other patterns as well including a matuka styled fly that imitated a juvenile whitefish, various beadhead softhackles, (blue, orange-ish red), and pheasant tails.

The fishing methodology was primarily fishing to the bank and searching out water that was slow enough to fish, eddy corners, insides of the riffles and the banks on the slower side of the river. With the river flowing at 6300 cfs or better there is a lot of river that is just not fishable yet.

One of the odd things was that most of the fish hooked or netted were rainbows, which is unusual for the water below Livingstone which is know for its brown trout. I’ve been thinking about that in retrospect and I think that the water is just running too high and fast to get the flies in front of the noses of the browns. Rainbows are know for there quick striking and I think that the bows were just more aggressive than the browns with the water flowing so fast. I believe that using more weight to get down would have resulted in more browns. It would have also resulted in a bunch off lost flies. It’s sort of a risk vs. reward thing. Who knows it was just odd.

This Brown took the rubberlegs just as I said to Nathan, ” I think the browns will be in the soft pockets behinds the rocks”.

Boom, fish on. I had cast to a small eddy pocket 2 feet by 4 feet long behind a bush and wham the fish shot after it. with the flows as high as they were it was hard to hit these types of spots.

Zack managed to hook and bring to the net this 14″ cutthroat.

A surprise and treat for Zack.

This was the average sized rainbows of the day.

They were feisty and almost everyone hooked would go airborne a number of times.

They were vigorous fighters and a challenge to land in the high flows.

You can sort of see the clarity of the water in this shot of landing a rainbow.

It was sort of a milky green, good for stealth but just a bit too high and fast.

The train running down the tracks over the bridge sort of brings you back to an older time where the train was the main means of transportation in the west.

I had a great day exploring new water with Zack and Nathan, caught a decent number of hot fish and enjoyed the Montana country side. Another day to enliven the memory banks.

Another Tradition to revisit – Clay