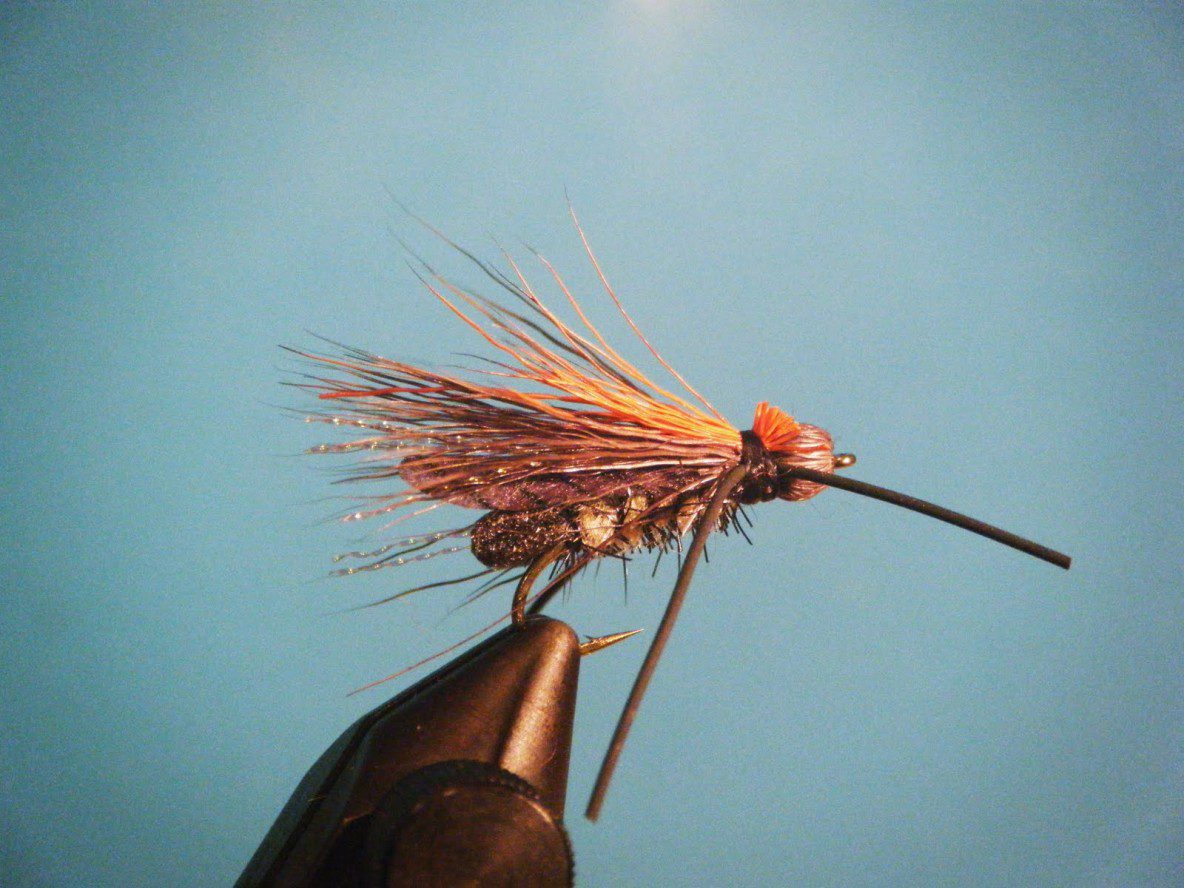 I’ve been able to play around at my vise with the rain pounding down for the last week or so. The Lower Yuba flows are receding a bit, but today they are still running at over 12,000 cfs, which is down from 20,0000 two days ago. When all this is over hopefully the Skwalas will have survived and be starting up.

I’m trying to refine two types of Skwala dries, one for the bouncier, nervous water, which so far is the prototype “Skwalanator” and now I’ve come up with a slow, eddy water prototype pattern I’m calling the “Knothead”.

The resident rainbows will take a Skwala Dry with reckless abandon sometimes in the nervous moving water when the Skwalas are in the drift, many patterns work, some better than other. When the fish are staged in slack or eddie water feeding on the helpless Skwalas it’s a different story, a much more imitative pattern is required. Twitching the fly can help but I’m convinced that you need to get (1) the profile correct (2) the size correct and (3) the color much closer to the natural. Thus the need for two separate patterns.

This is all conjecture and experimentation and will hopefully be put to test in January.

Pattern Recipe for the “Yuba Knothead”

This “Skwala Knothead” prototye pattern is tied with a bullet head using gray dun died compradun deer hair. It has a dubbed body and a sparse overwing. I’ve trimmed the palmered hackle that runs through the abdomen on the bottom to enable the fly to float flush or just below the film. I’m still looking for the right rubberleg material and this mini black rubberleg material may be to large. Like I said it is a prototype until the fish tell me they like it.

Hook – Tiemco 2312, Size 12
Thread – 6/0 Olive (I like to use the 6/0 for the deer hair bullethead)
Egg Sack – 1/8″ black foam cut to 3/32″ wide. (Double over and tie about 1/8″ past the hook bend).
Palmered Hackle – Size 14 black dry fly hackle
Body – Yellow antron dubbing wrapped with the Olive thread (When the yellow dubbing is wrapped with the olive thread the olive color blends with the yellow dubbing to give it the yellow/olive cast that you need to match the Yuba River Skwalas. This is the second major change from all the patterns on the market.
Under wing – Hareline No-Fray Wing Material Black (Fine mesh wing material like micro window screen)
Over wing Flash – 5 to six strands of Krystal Flash
Bullethead/Overwing – Dark Brown Deer Hair – (Sparse Wing)
Rubber Legs – 2 pairs of Hareline Fine Round Rubber Legs Black
Visible Over Wing – Small bunch of orange dyed Deer Hair

Once the fly is completed, carefully trim the deer hair overwing and remove all the deerhair at the bottom and on the two sides until you get the desired profile of a sparse overwing. I’ve left some on the sides as I just think it makes the fly look buggier. If the trout don’t like it I’ll just trim more off the sides.

Also trim the palmered hackle off the bottom of the fly.

I can’t wait to test this pattern out!