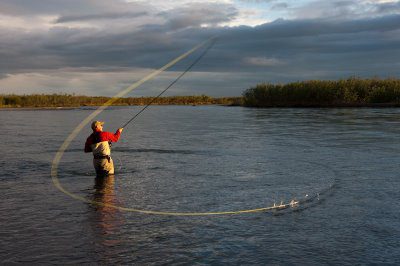 When you first start to get ready to start spey casting you need to have some “Practice Casts” at your disposal. These are straight line casts.

To get you prepared  I’m putting together a series of articles to create a “Spey and Switch Rod Casting Primer”. The Primer will cover the basic principals of spey casting and the execution of practice casts like the;

It will also cover the basic spey casts like the;

This Part I will cover the Basics to get started with spey casting.

When you arrive at the river to practice there are some things you should do to prepare for your day.

There are three basic principles that apply to all of the spey casts that you will employ. These first two principals are “Set Up” principals

“Line Stick”
The second principal, which is also a “Set Up” principal is equally important,. It is called “Line Stick”. “Line Stick” refers to the amount of line that is lying on the water as you start the forward cast. This is the critical point, the line is like tacky glue, the more line that is in contact with the water at the start of the cast, the more energy is lost when trying to rip the line off the surface film. If you have too much “Line Stick” your cast sort of dies and fails.

A good spey cast will have a little line on the water, just the tip of the fly line, with a small amount of “Line Stick” on the water. When you start your forward cast, it will come cleanly out of the water with little problem.

When you pick a target on the opposite bank for your forward cast, your back cast must be set up 180 degrees behind you, or opposite of the target.

To visualize this effect, string up the top section of your rod with yarn and pull back on it like a bow and arrow. When you let go, the yarn flies straight forward, 180 degrees, from the starting point, or opposite of the starting point.

To make your cast fire properly to your target you must get this right. Practice makes perfect.

Putting These Basic Principles to Use on the Water

The first principal we identified is the “D Loop”, which is the action that loads the rod for the forward cast.

Putting the “D Loop” to Use

Practice both types of “D Loops”. Practice casting making small and large “D Loops”. You’ll need this in your bag of tricks when you are out on the stream.

Putting the Principal of “Line Stick” to Use
The second principal, “Line Stick”, “Grip” or the “Anchor Point” all refer to amount of fly line on the water prior to starting your forward cast, after you have formed your “D Loop”

Ideally you want to strive for minimal line stick. Let’s talk about why.

Putting the “180 Degree” Principal to Use
The third principal, the 180 Degree Principal, is the most difficult. Spey casting is about changing direction, then casting up and down the river. You need to add “Rotation” to your casting stroke.

When casting, and especially when practicing, remember these three principles, which are the basis of all spey casting.

(3) Remember the “180 Degree Principal” and rotate your hips and body to set your “D Loop “Opposite” or “180 Degrees” from your target.