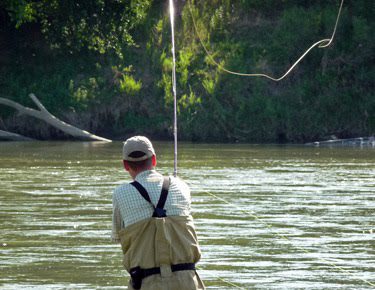 This section will focus only on improving and perfecting the “Forward Cast”.

The simplest way to practice the forward cast is with the “Roll Cast”.

The reason why it is the best is that the roll cast starts from a static rod position. You can set your “D Loop” with the line over your shoulder and you can then concentrate on your rod and hand positions prior to throwing the “Forward Cast”

By using the pause of the “Roll Cast”, once you have set your “D Loop”, you can to your rod and hands properly.

Use the pause to think about the starting position and how the cast should work.

When you are ready make the forward stroke.

To get a get a smooth tight loop your forward stroke must stop with a very abrupt positive stop.

The Fundamentals of the Forward Cast
Once you have set up your “D Loop” over your shoulder you need to get your starting position right.

(a) Concentrate on getting the arms in the right position to start.

(b) The top hand should be relaxed and at about ear height.

(c) The positioning of the top hand is dependent on the amount of line you are working. With a short belly line your stroke will be short (12” +/-) and in front of you. With a long belly line the stroke will be long reaching behind you and then accelerating forward.

(d) The bottom hand should be holding the rod at angle of approximately 45 degrees.

How the Power of the Forward Stoke is Developed
The power of the stroke comes from two aspects with short or mid-belly line lengths;

(1) The right wrist of the top hand snapping and coinciding with;

(2) The bottom hand powering or tugging back.

Both move at the very same time to maximize the power application.The power of the stroke comes from three aspects when casting long belly line lengths.

(1) The right wrist of the top hand snapping and coinciding with;

(2) The bottom hand powering or tugging back. Both move at the very same time to maximize the power application.

(3) The last aspect is that the right elbow locks straight.

Body – The first thing that should happen with the forward cast is the body should be moving forward into the cast. Lean into the cast. Transfer your weight from the back foot to the front foot.

Arm – The arm angle is very critical to an efficient cast. The rod should be angled down from the ear at a 45 degree angle +/-. The rod should move forward with both hands at this same angle until the wrist snaps and the low hand pulls back simultaneously.

Note: A common error is to roll the cast forward, this throws the rod forward in an arch forming a big open loop without any power. Avoid an early tilt and rotation of the rod.

Power – Work on the simultaneous, wrist snap and pull back for the power stroke. The delayed tilt and continuous application will give you a tight powerful loop.

Common Faults with the Forward Stroke
“Hitting From the Top” – This is an impatient forward stroke. The forward stroke starts with a massive force. An over application of power, too soon. This stroke tend to climb in the air and falls with no power.Creep

“Creep” – This happens when while you wait for the back cast to anchor or get into position, you creep forward with the rod to almost in the vertical position. You then apply the power from the 12 o’clock position, once you have moved the stroke too far forward. When this happens you have lost your half your power stroke and run out of gas so to speak.

By the time the power is applied the rod is past the vertical position and forces the line to force downward and crumples into the water instead of flying out above the water.

To correct “Creep”, remember that when you’ve completed your back cast, your rod should be motionless or still, shift your body weight forward, maintaining the correct rod angle and then make the forward cast.

If your line is firing downwards into the water, work on not creeping.

“Thrusting” – Thrusting is common when transitioning from single handed casting and not pulling back with the bottom hand.

The bottom hand goes forward with the top hand and doesn’t pull back.

To correct “Thrusting” pull back on your top hand as you turn your wrist into the forward cast simultaneously.

“Rolling the Shoulder” – Avoid rolling your shoulder, or rotating the shoulder around as you make your forward cast.

If you roll or rotate your shoulder it doesn’t allow your cast to fire in a straight line. It will follow your rotation and not fire in a 180 degree line.

The cast will unfurl in a curving, sideways, fading direction.

The cast will land in a downstream loop with your flies upstream.

To correct “Rolling the Shoulder” square your shoulders to your target line when making the forward cast.