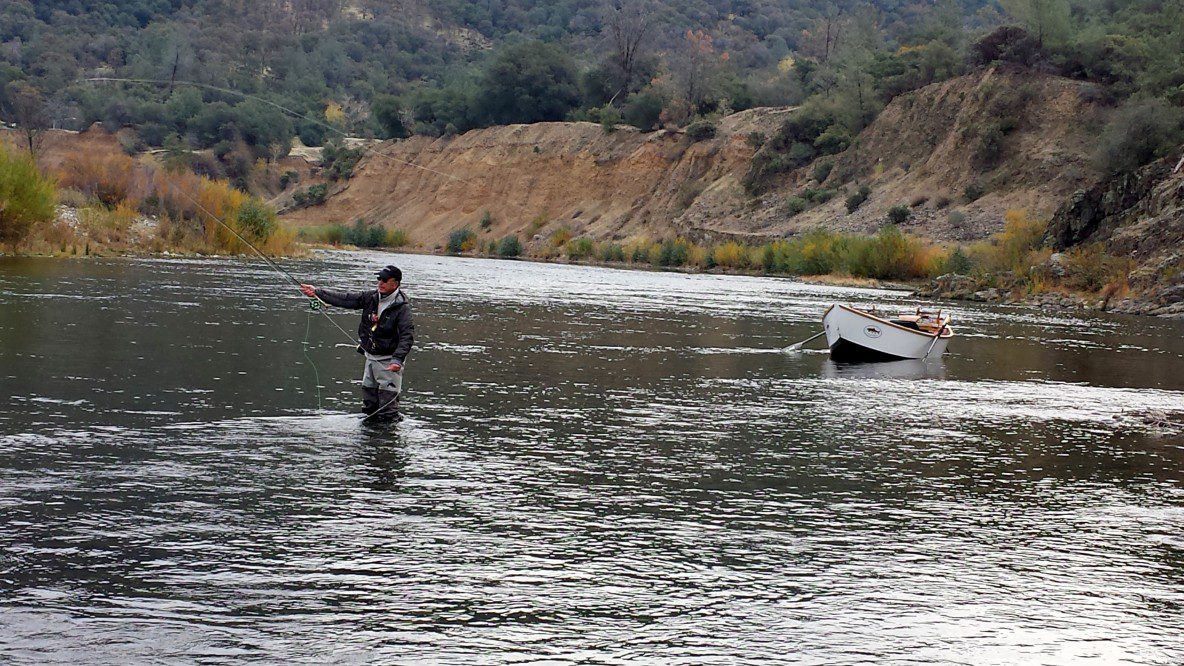 The Lower Yuba river above the Parks Bar Bridge opened up on December 1st after being closed for 3 months. The river above the bridge is closed to protect spawning Chinook Salmon. The “Opener” is a much anticipated event that most local fishers have blocked out on their calendars, called in sick or just plain played hooky from whatever they should be doing. In other words there are a typically a lot of anglers on the river.

This is a tale of two days, the “Opener” and the “Day After”. It’s about a bunch of fish to the net on the “Opener” versus “A Few” on the next day. I’m not much of a fish counter so let’s leave the counting to that.

Here’s how the opening day went.

I made it down to the river early with my good fishing buddy “Frank Rinella”. We’ve fished the “Opener” for many years, it’s sort of a ritual. Something we both look forward to. We hit the river at about 7:30 and took a survey of the river where we launched the boat. There was a drift boat with two wading anglers in a different run a fair distance above where we were. There were two anglers fishing the tailout of the run we were in. I noticed 2 more anglers hiking upstream. We really had one choice, get it the boat and fish the run right in front of us. This run is known for the spawning beds for salmon just upstream at the head of the run. This run goes from the drop off at the base of the riffle upstream to a nice run that is about 5 feet at the deepest and then tails out. It is about two football fields long. We had about 200 yards to fish for ourselves. Pretty darn lucky.

We had to rig up and get to fishing before the crowd closed in on us. Frank set up a nymphing rig with a Troutbead and a San Juan Worm and started fishing. I had to put my rod and reel together and get set up. Franks was into fish immediately. It took me 10 minutes to get rigged as I kept getting distracted netting his fish. As far as my rigging up I really had a couple of things I could do, but there were salmon beds upstream and a few salmon in the riffles splashing around. So the choice was obvious to me. My Egg Rig!

I tied up a three fly rig. I started with a 9 foot 3x tapered leader, extended with 3x Fluorocarbon tippet to a painted Troutbead, natural color. I tied another 18″ piece of 3x Fluorocarbon and tied on a black rubberleg stonefly, I then added another piece of 4x fluorocarbon and added a size 18 Flatulator, (BWO). When all tied up the flies are about 14″ to 16″ apart. I then placed two decent sized split shot at the first tippet knot above the Troutbead. This is sort of my standard rig for fishing the runs below most any spawning beds. The egg goes closest to the leader, followed by by an attractor and then a imitative mayfly on the point. I mostly fish this rig without an indicator and just stay tight to the flies. I often add an indicator to the rig but I typically start out “Tight-Lining”.

Once I got rigged up Frank took a break and watched me fish. I had similar luck.

We fished this run and found a bunch of willing fish. They slashed at the Troutbeads at will. Quite a pod of fish. They averaged about 12″ to 13″. 3 out of 4 took the beads, I caught 2 on the Stonefly, Frank caught a couple on the San Juan Worm. Not one on the mayfly. The fishing was fast until the sun rose over the ridge and shined on the river. It slowed down almost immediately. Not that it stopped, it slowed down. We fished this run and headed downstream in the boat. The rest of the day turned into a fish here and a fish there and then shuting down at about 2:00.

The summary for the “Opener” was great, a bunch of fish to the net, mostly in the first 2 hours,  mostly about 13″ (the largest about 15″-16″, mostly on Troutbeads. Fishermen all over the place and hard to find open water.

So on to Day Two. Frank and I decided to come back the next morning and fish until about noon. Basically start at the same spot and get there about a half hour earlier. We expected the crowd to thin out considerably and not be as crowded as the “Opener”. We got there as planned, rigged up pretty much exactly as the day before. No one on the river. We had the river to ourselves, at least early on. We started with high hopes, we fished the same run as the day before, we got our clocks cleaned. Not a bump. This was after changing rigs, flies, techniques the works. We could not buy a fish. (actually 1). We took our lumps and headed down stream. The count for the half day was three. Three is easy an easy number to keep track of. A Bunch is hard.

So, the tale of two days, A bunch to a couple. I guess that’s fishing, it’s also about sore lips and  fishing pressure!