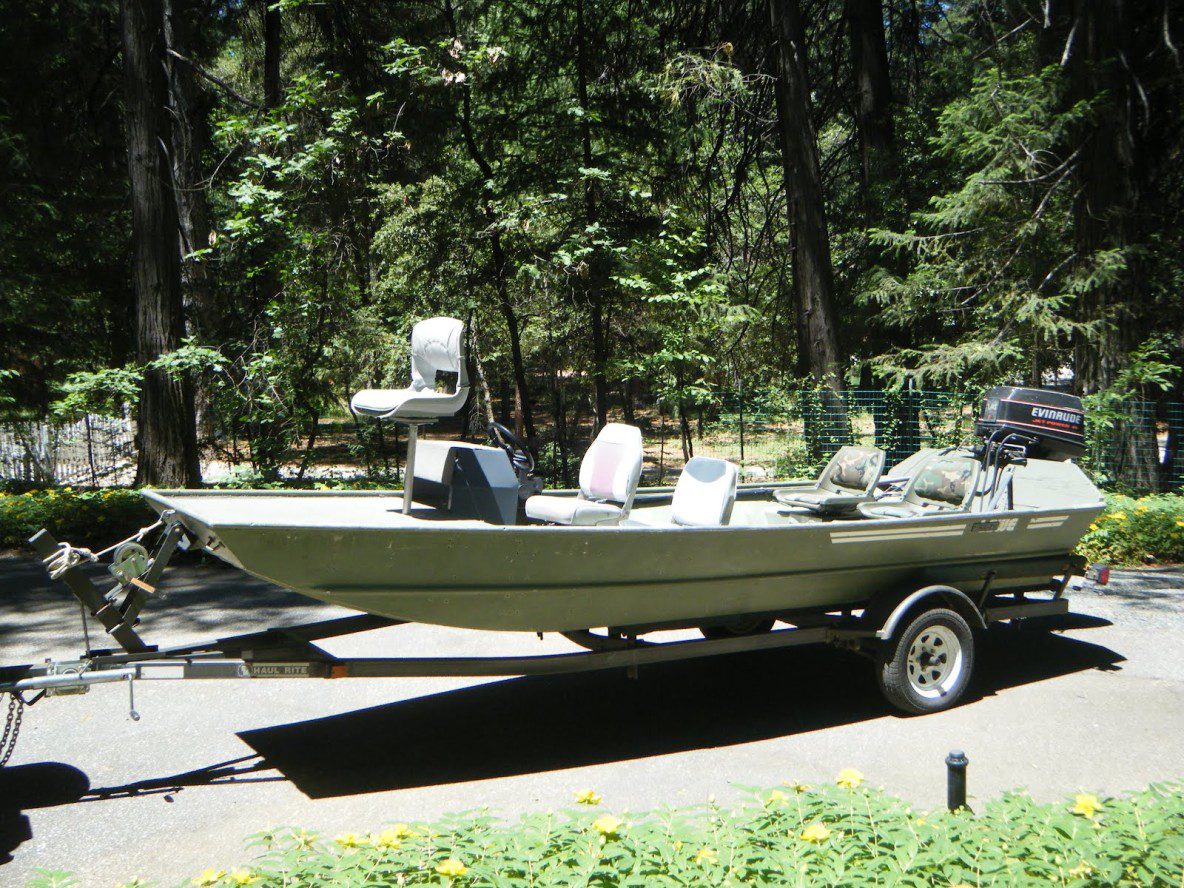 This is the new addition to the Fly Fishing Traditions fleet, “The Swamp Thing”. It traveled all the way from Donighan, Michigan to make its home here in Northern California. As you probably have heard I’m selling my 13′ 4″ Boston Whaler Sport to make room for it. The whaler is in the shop right now getting the chines re-worked and a new coat of epoxy marine paint on the entire bottom. I’m also stripping out all the Philipine Mahogany wood work and refinishing it. When I’m done it will be almost completely restored. I decided to do it right!

The Swamp Thing is a 16′ 1982 Lowe Roughneck. It’s been around the block, the paints pretty tarnished but I rubbed it out and it looks a lot better. I’ve ordered some factory “Lowe” paint and I’ll give it a new coat later this summer, but you know how that goes.

The controls are in the right front position and it has 3 other seats.

It’s got a live well, not that I’ll be using it, a carpeted platform at the bow with a receptor for the post and seat.

The main section is carpeted.

Here’s a shot of the storage under the bow and the carpeted deck.

The seat mounts in the bracket.

Here’s a shot of the captain’s seat with the controls.

The motor also has a power tilt function that is on the shifter.

There is also controls on the motor itself. It works!

The best thing about this boat, other that the fact it is a jet sled, is that it’s got an Envirude factory Jet Pump. The motor is a V-4 which is known for its dependability. It’s a 90 horsepower that delivers 65 hp through the jet pump. The motor is a 1993 that has very little hours on it. My marine mechanic, Steve Cyr, from Float Your Boats believes it has less that 40 hours on it.

I didn’t hardly sleep last night anticpating meeting Steve to fire the motor up. He had me pull the plugs, squirt WD40 in each cylinder (it’s a 4 cylinder) and let it sit for at least 2 hours. Then I cranked it over without the plugs in it to spit out the WD40. I put the plugs back in and headed to Scotts Flat Lake this morning to meet him.

When we got there he pulled the plugs again and cranked it one more time, to make sure I’d got enough of the WD40 out. He then squirted some starting fluid in each cylinder and we put the plugs back in. I attached the gas line and we crossed our fingers. It popped immediately which was from the starting fluid. I tried it again and hit the electric choke and it started after a couple of bumps. Steve kept pumping the gas line to ensure all the air was out of the line and when it warmed up it just purred. Steve pushed me off and I moved outside of the 5 mph zone and opened it up. It jumped up on plane and it flew. Fast that is. This surprised me a bit. It seemed as fast as my whaler. I took a few turns to see how it handled and it just slides through the turns. That’s a jet pump.

So I guess this boat buying experience is one with a happy ending. Buying an ebay boat by relying on pictures and asking question is and was nerve racking. Especially when it was in Missouri. I had it hauled here by uship. All in all it was just a leap of faith. Looks like this time it payed off.