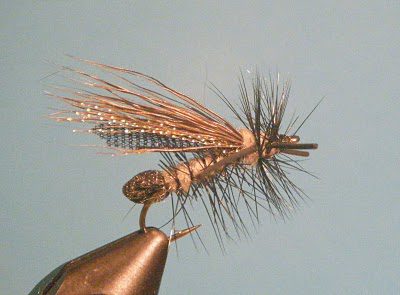 Note: The colors are definitely more golden than this photo captures

Introducing “The Yuba Skwalanator”. I’ve been on a quest since last winter after being humiliated by refusal after refusal of every Skawala dry fly I had in my box, to come up with a better pattern to match the Skwalas on our local Lower Yuba River. I had decent luck last February and March with the standard patterns I carry when fishing the nervous types of water, but when the fish would move down into eddy type water or the flats below riffles where they could really take a good look at the flies, no takers. They turned up their noses and said “Fakers go home!” They would take live Skwalas inches from my dry fly put no dice.

So in an effort to refine this pattern I have collected just about every pattern on the market out there and talked to my fishing buddies, taken many mental notes and this is the pattern I’ve come up with this tie.

Recipe for the “Yuba Skwalanator”

(Arnold is still Governor by the way).

Hook – Tiemco 2312, Size 12 (This is the first major change. The Lower Yuba Skwalas are smaller than most patterns in the market)
Thread – 6/0 or 8/0 Black ( I like to use the 8/0 because of the many materials used in this pattern.
Egg Sack – 1/8″ black foam cut to 3/32″ wide. (Double over and tie about 1/8″ past the hook bend.
Body – Blended antron dubbing 2/3 golden, 1/3 olive. ( This is the second major change from all the patterns on the market. The Skwala on the Yuba river are more Golden Olive with emphasis on the golden)
Under wing – Hareline No-Fray Wing Material Black (Fine mesh wing material like micro window screen)
Over wing Flash – 5 to six strands of Krystal Flash
Wing – Dark Brown Deer Hair – (Sparse Wing)
Dubbing at Thorax – Blended antron dubbing 2/3 golden, 1/3 olive
Rubber Legs – 2 pairs of Hareline Fine Round Rubber Legs Black
Hackle – Black Dry Fly Hackle size 14

That’s a lot of materials to fit on that size 12 hook. Minimize your wraps and dubb with very small amounts of dubbing. Sparse!

As a note: I’ve tied some of these with the Deer Hair wing using the cut butts over the wing. I’ve heard that that has made a difference. I took photos of this with a standard wing because it was prettier. I guess the trout might like the weird hair do.

Thanks to Norm Sauer, Tom Page, Keith Scott and Frank Rinella for their insights on the Lower Yuba River Skwala hatch. Also thankd to ralph Wood who came up with a Skwala Pattern that inspired this sort of “Stimulator Tie”. Thus watch out for the Yuba Skwalanator.