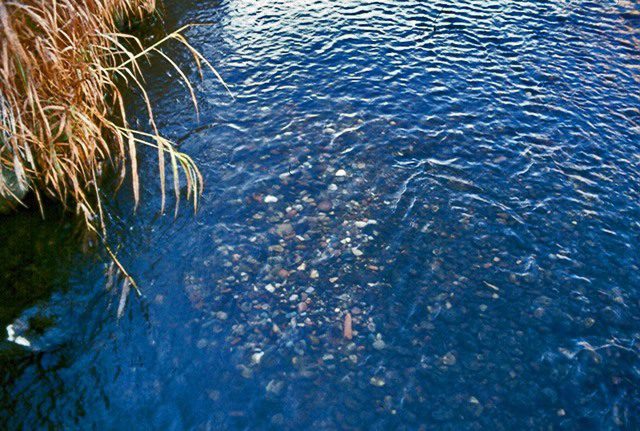 What can we do to help educate the general fly fishing populous?

What is a redd?

When we think of redds we usually think, “salmon redd”. A salmon redd is a depression created by the upstroke of the female salmon’s body and tail, sucking up the river bottom gravel and using the river current to drift it downstream. The female salmon digs a number of redds, depositing a few hundred eggs in each during the one or two days she is spawning. Each redd is located immediately upstream from the last to allow the current to deposit drifting gravel on top of and covering the previous redd. Redds are very obvious in the stream, visible by clean exposed white gravel. Salmon spawn between 2000 and 6000 eggs, depending upon species. Different sized gravel is used as redd locations by each species. Steelhead and rainbow trout often use the salmon redds to spawn in the spring.

When Wading the River

Concentrate angling activity in areas of the river where spawning salmon, steelhead and trout may be less prevalent. Avoid areas of shallow water where you observe concentrations of spawning salmon and their redds (gravel “nests”). Salmon redds are generally between 1-2 square meters in size and may be recognized by the appearance of clean looking gravel which is loose and soft underfoot, as opposed to firmer and darker gravel nearby. Steelhead and trout will often use the same areas as the salmon to spawn. When newly formed, redds will appear to be a depression with a mound of gravel on the downstream side. Eggs will be buried in the mound of gravel and for several meters downstream. Walking on the redds may kill buried eggs, so please avoid them entirely.

Does wading in and around the redds impact egg mortality?

Fact – A study done in Montana (published 1993 edition of Trout Unlimited)on the effects of wading around on trout spawning nests, indicated that just one step on a nest of eggs could immediately cause up to 47% mortality on the eggs. As the eggs that were smashed decay, the spores from the decaying eggs colonize on the good eggs and kill them as well. This is like having a rotten apple in the barrel where eventually all of the apples in the barrel will also rot.

Are boats are harmful to redds.

Fact – Fishermen who drag their anchor at times to slow a drifting boat will destroy any egg nest the anchor is dragged through. Engaging in such activities is like planting a vegetable garden and then walking on and driving tractors all over the planted ground.

Fact – The passage of drift boats, rafts and canoes, even sliding over the redds, is unlikely to be harmful.

It’s OK to wade out in the river on the ridges in the Redd areas.

Fiction – If you attempt wading into an area where the redds are located, walking on top the ridges can damage sensitive eggs. Walking on the top of the redds compresses the gravel and cuts off availability of enough oxygen . This could unwittingly kill thousands of eggs.

What can we do about it?

As anglers we can educate friends and family, we can work on ways to educate anglers we meet on the stream when fishing. With kind words and not an attitude.
We see on catch basin drains where it says something to the effect of “Warning, Drains To Fish Habitats.” Why not put signs at trail heads or on the local maps to warn of potential damage, something like “Sensitive Habitat Areas – Salmon Redds” or whatever, to start getting the point across.

It would be a good idea to make up a few laminated sheets and stick them on small sign posts at popular get on locations describing the sensitive locations on that particular river.

How about putting together an informational pamphlet?

How about having a talk at local fly fishing clubs?

I believe it will take a grass roots effort to make a difference.

Any one interested in helping out or have any other ideas?